Exploring 7 islands in 7 days is a great way to revive your mind and soul.The ancient Greeks fully comprehended the importance of the balance between mind and body, and they knew how to utilise the country’s bountiful natural resources to further health and happiness.

“Experience, travel – these are as education in themselves” – Euripides

Should I have known that such peaceful and beautiful islands are to be found in Europe I would have saved myself a lengthy  trip or two to Hawaii.

You can find place to restore your mind, body and spirit in less than one week. No need to spend long hours on the plane and fight with jetlag. 3,5 hours flight takes you from London to Rhodes where you can start your Dodecaneseislands‘ hopping.

1.Rhodes – best for exploring the history

The name of the island in the Greek language is Rodos (Ρόδος) and it is named after the daughter of the ancient greek God Poseidon. According to the greek mythology, the island was given to the God Helios (meaning Sun) who was married to Rodos and named the land after her. 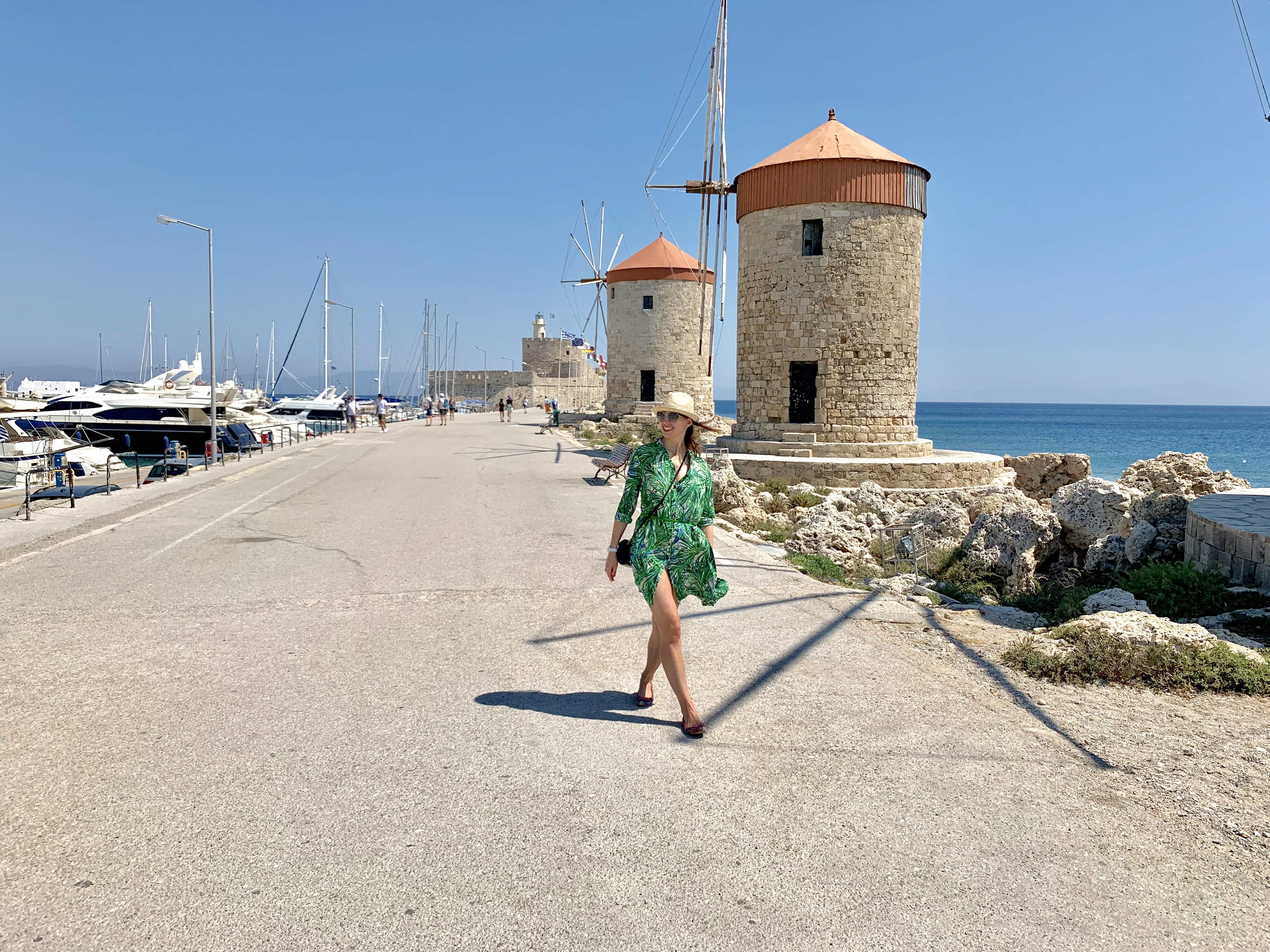 Well preserved medieval town sourrounded by the citadel gives you a taste of  history.

Rhodes Old Town is one of the best preserved medieval cities and was declared a UNESCO World Heritage Site in 1998. Some of the historic structures now house museums, like the Archaeological Museum and the Museum of Modern Greek Art. Spend a few hours wandering the labyrinth of streets to discover more about Rhodes’ interesting past.

Have a lunch at Kontiki Restaurant at Madraki Port to enjoy  view of the port, funky music and a greek sauvignon blanc ( Assytiko, www.hatzimichalis.gr) along with a crab salad or grilled octopus to cheer up your soul. 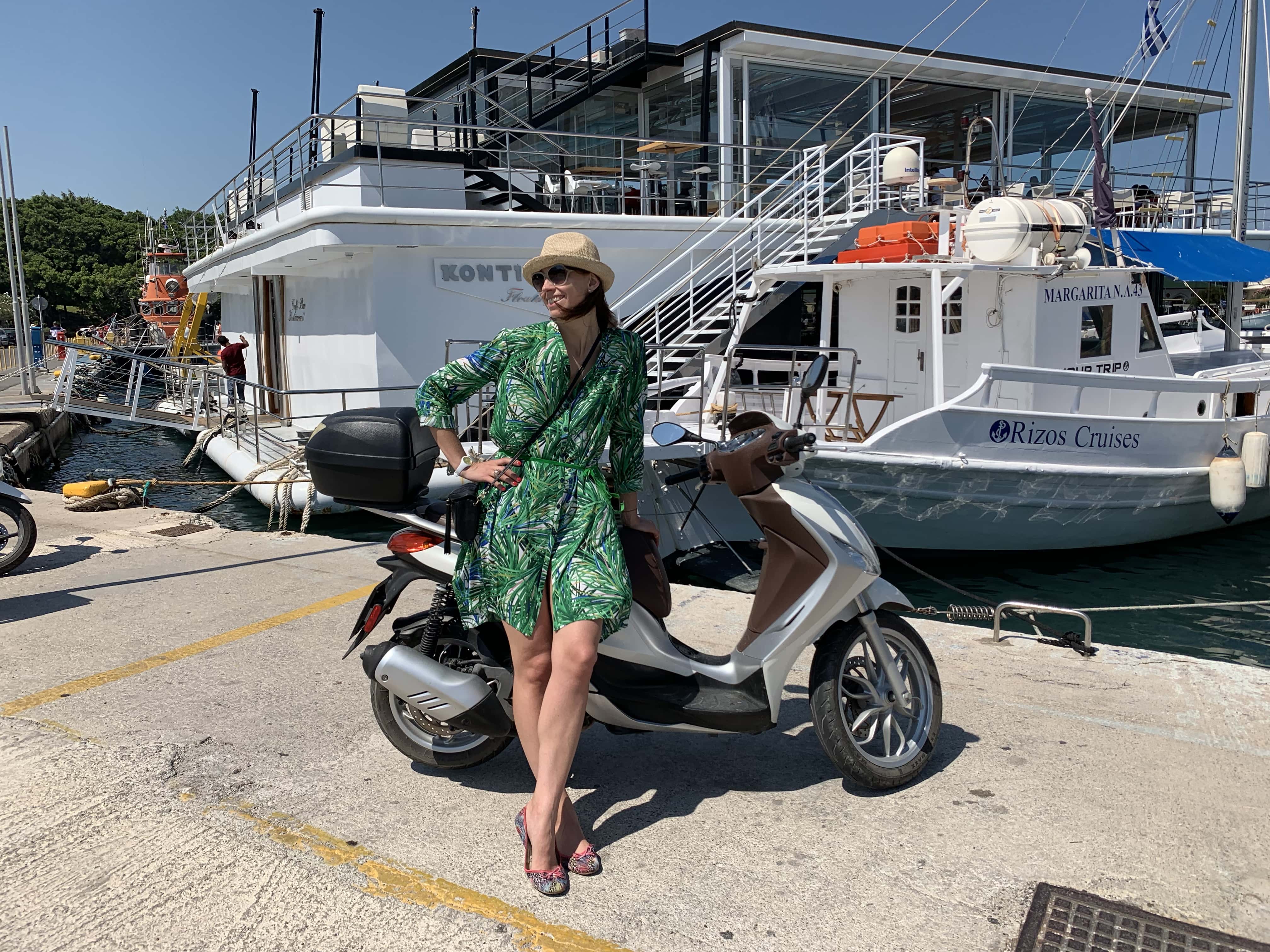 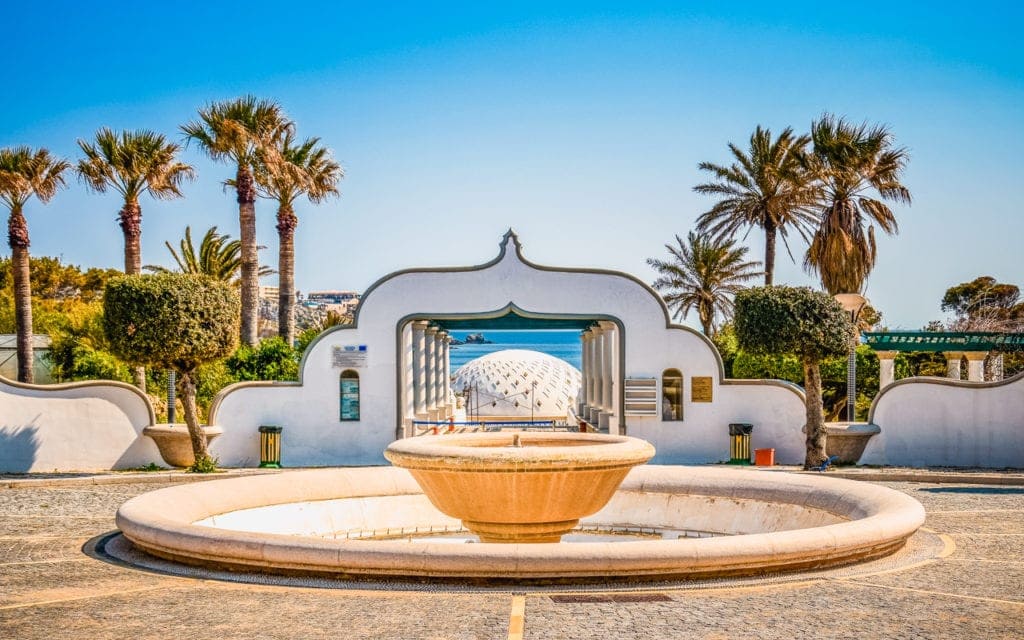 The thermal springs of Kallithea in Rhodes, were well known since the Ancient Greece times for the beneficial properties of their waters springing up from the surrounding rocks.

2.Symi- a laid back glamour 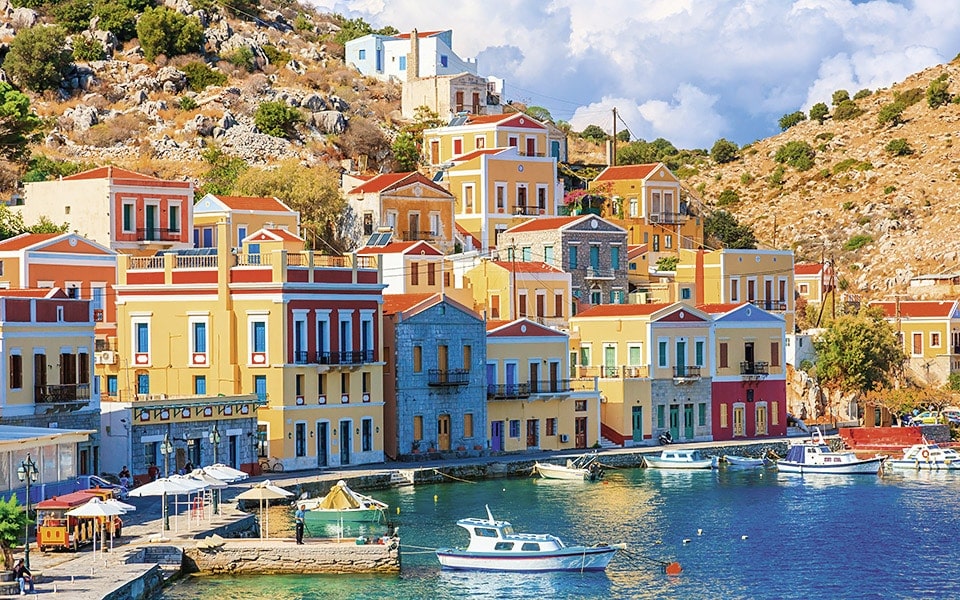 Called one of the most picturesque islands of Greece, Symi is a gem of the Dodecanese islands, which can be reached by ferry from Rhodes and takes only 1 hour ride. The island is one of Greece’s best kept secrets. It stands out for its beautiful architecture, colorful houses and relaxed atmosphere. 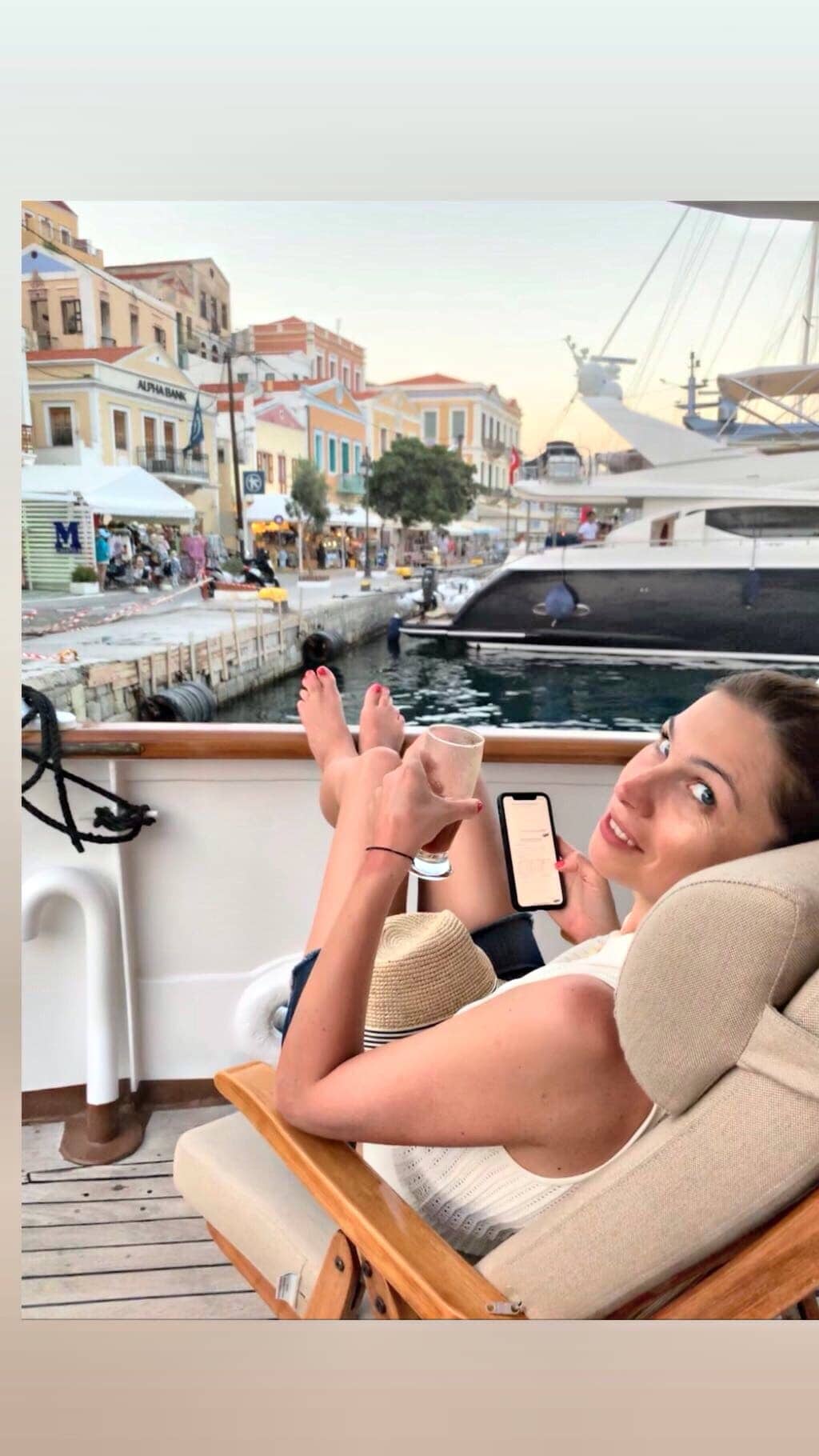 It is adorned with traditional houses and charming neoclassical buildings that feature peaked roofs of red tile and wonderful balconies. Here you can enjoy relaxing walks along the colorful coastline, enjoy stylish boutiques and jewelry shops and take plenty of pictures. With its laid-back glamour, luminous sea and almost tropical microclimate, Symi is a hit with French and Italian yachties.

No blitz, just humble bliss and unspoiled charm. Tilos is a small and quiet island, good place if you want to stay away from crowds and noise. It’s known as a green island, popular with hikers and bird watchers, and most of it is now a protected nature reserve. 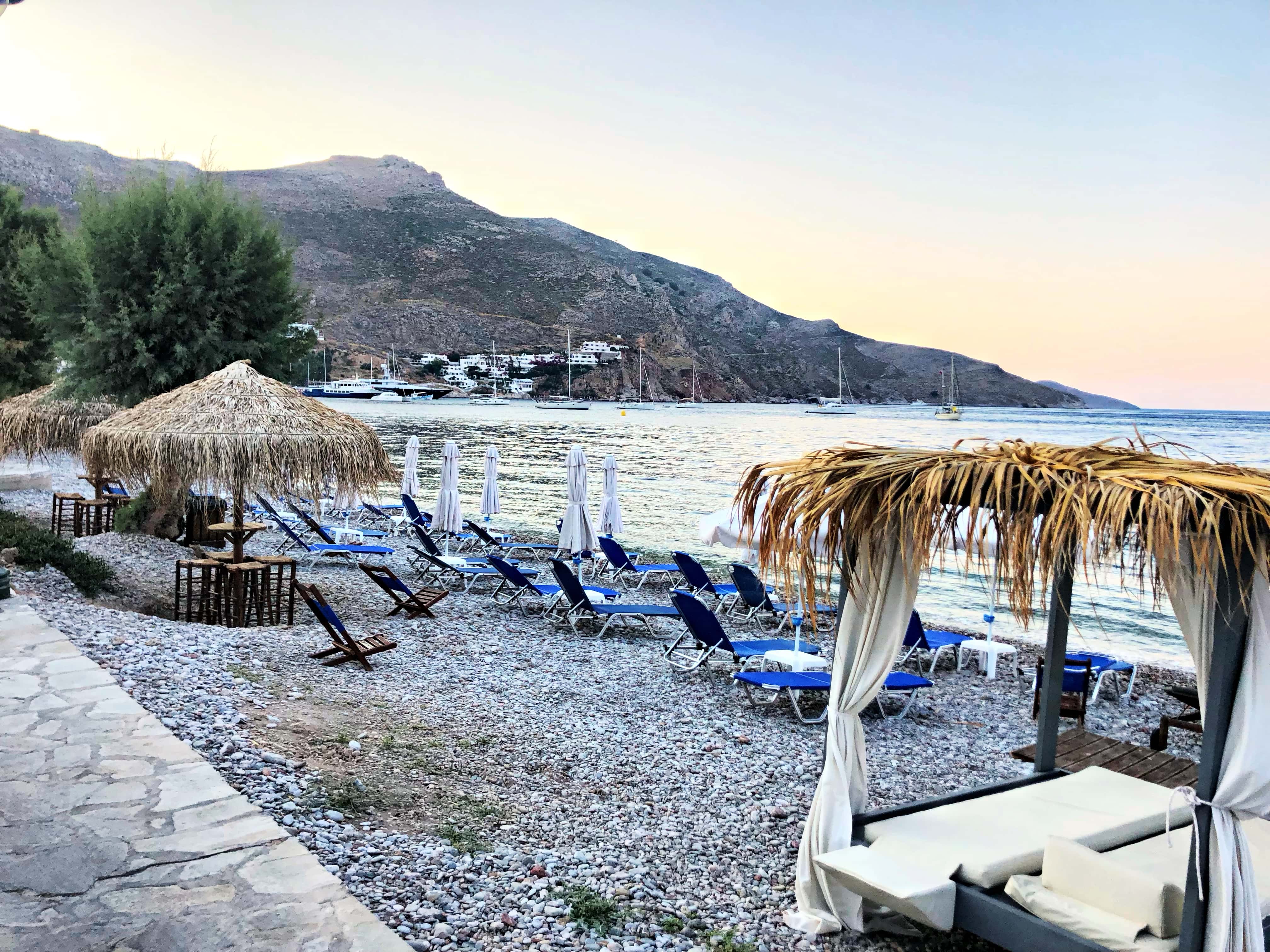 It makes a perfect destination in the sunny Dodecanese strip of islands for renting an apartment or a room overlooking little bay and a port. You will find restaurants and tavernas along the coast as well as few surprises such as a little fashion gem- boutique” Aqua” with stock of summer outfits from greek and Italian designers. You can check them out here: INSTAGRAM: meni_roditi. 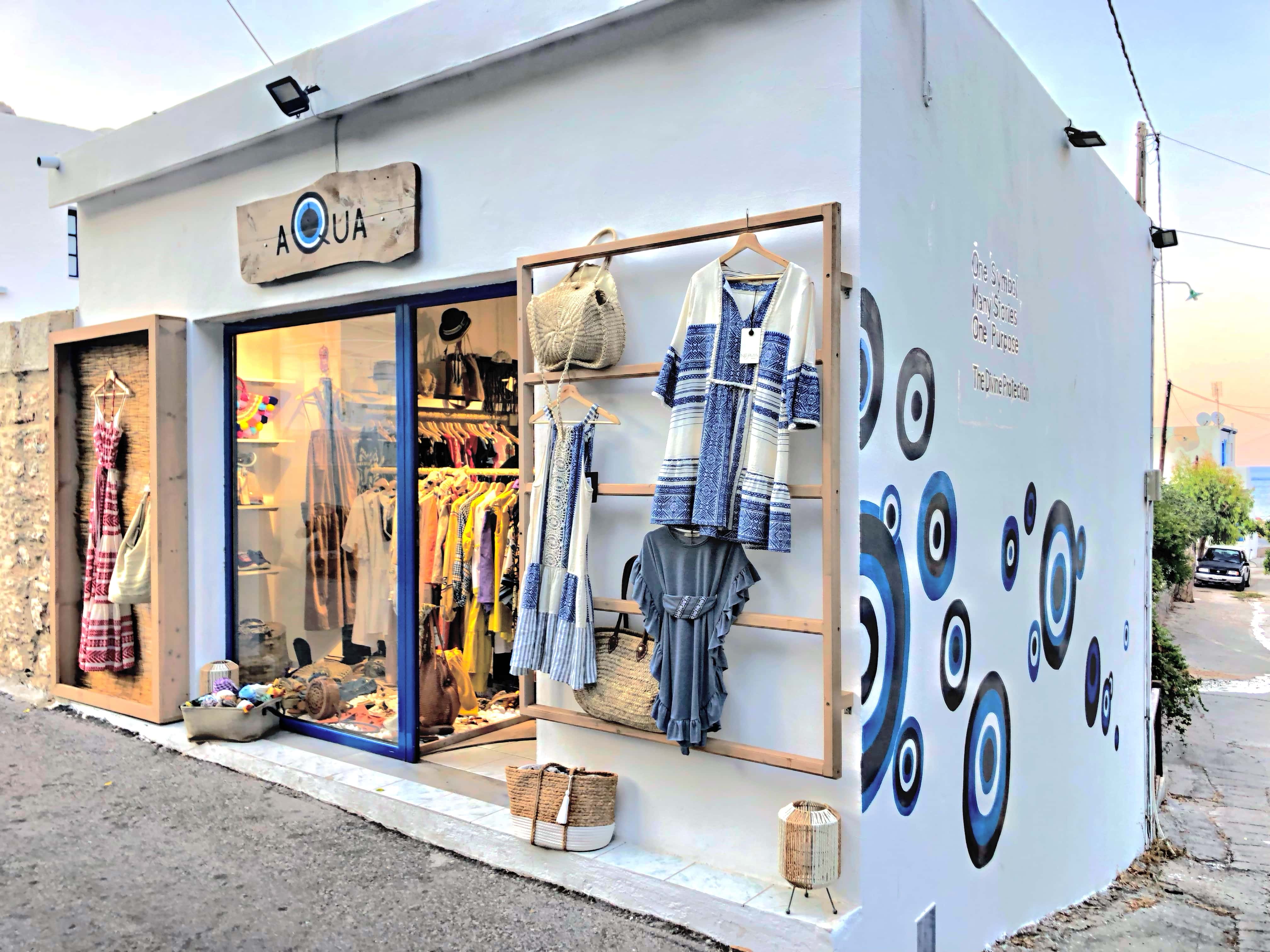 Interesting fact: Tilos is the first island in the Mediterranean to run only on wind and solar power. 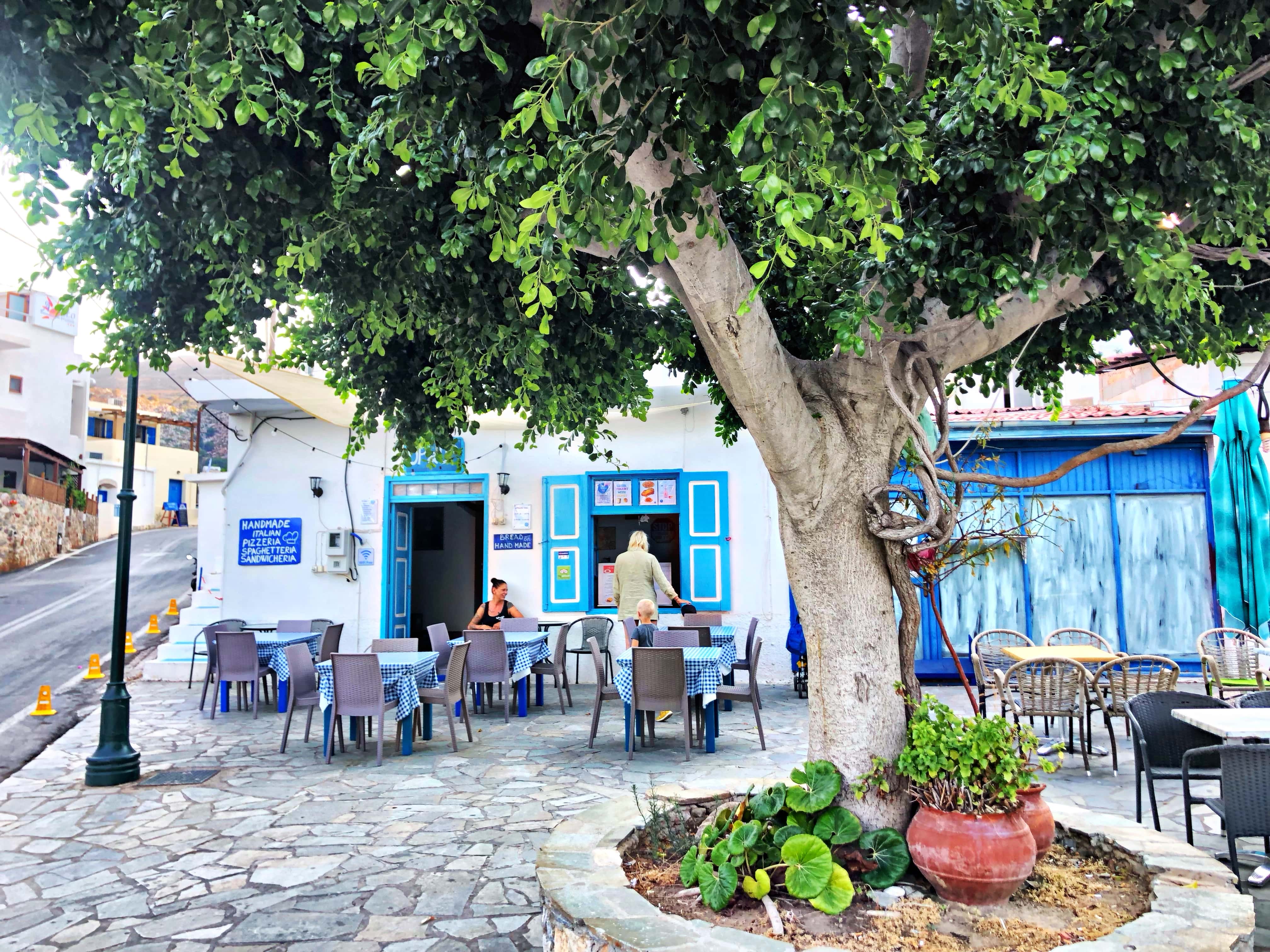 4.Nisyros- best for walking in a volcano

Nisyros, with fewer than 1,000 permanent inhabitants, is famous for having the only ‘active’ volcano in Greece together with Santorini (Thyra). The island is essentially a volcanic cone with a large collapsed caldera in the center. It is possible to walk into the volcanic crater and view the smoking fumaroles at close hand. 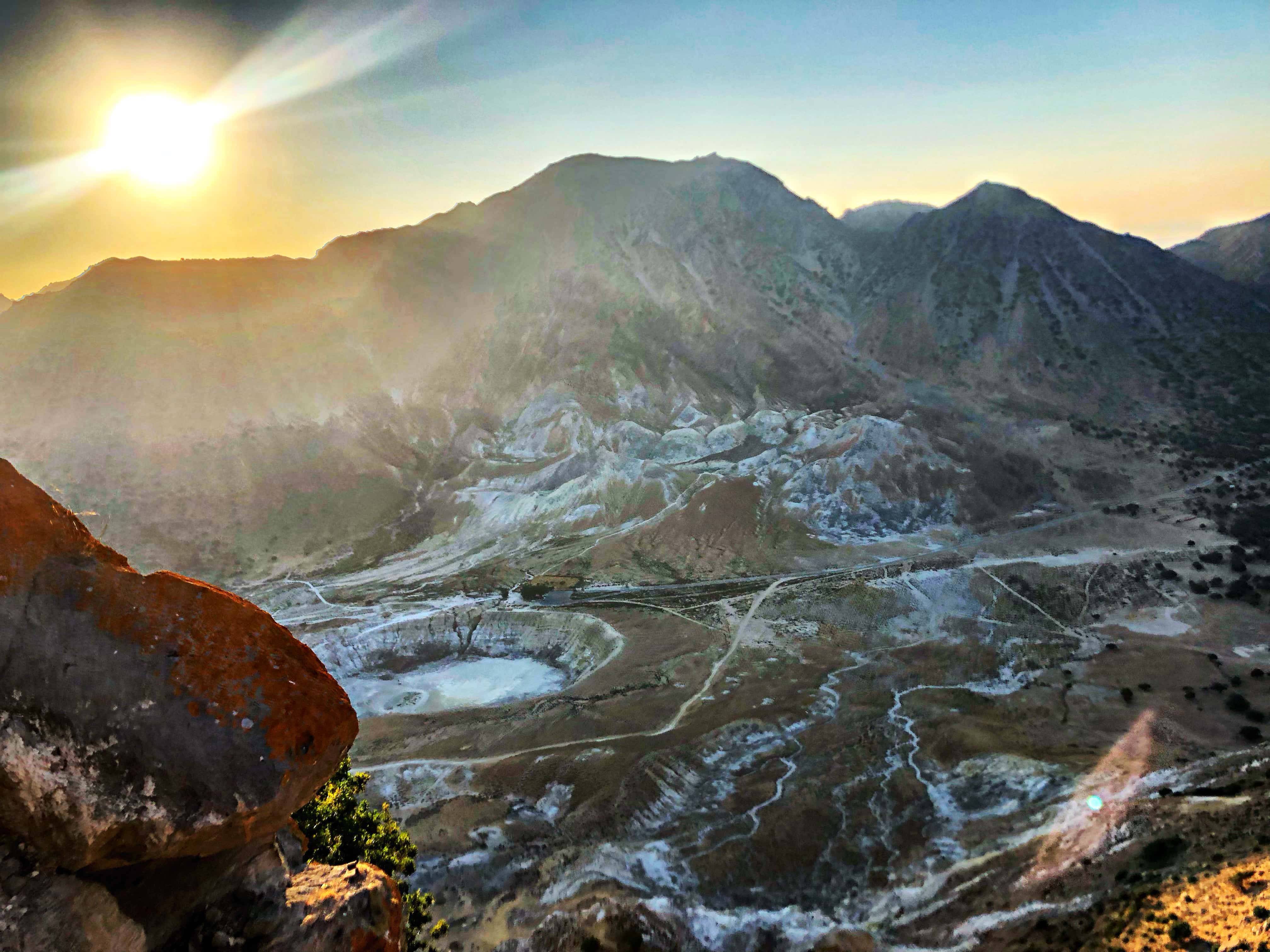 There are two main villages on the island: Mandraki in the north-west (where the ferries dock) and Nikea, up on the edge of the volcanic rim to the south. 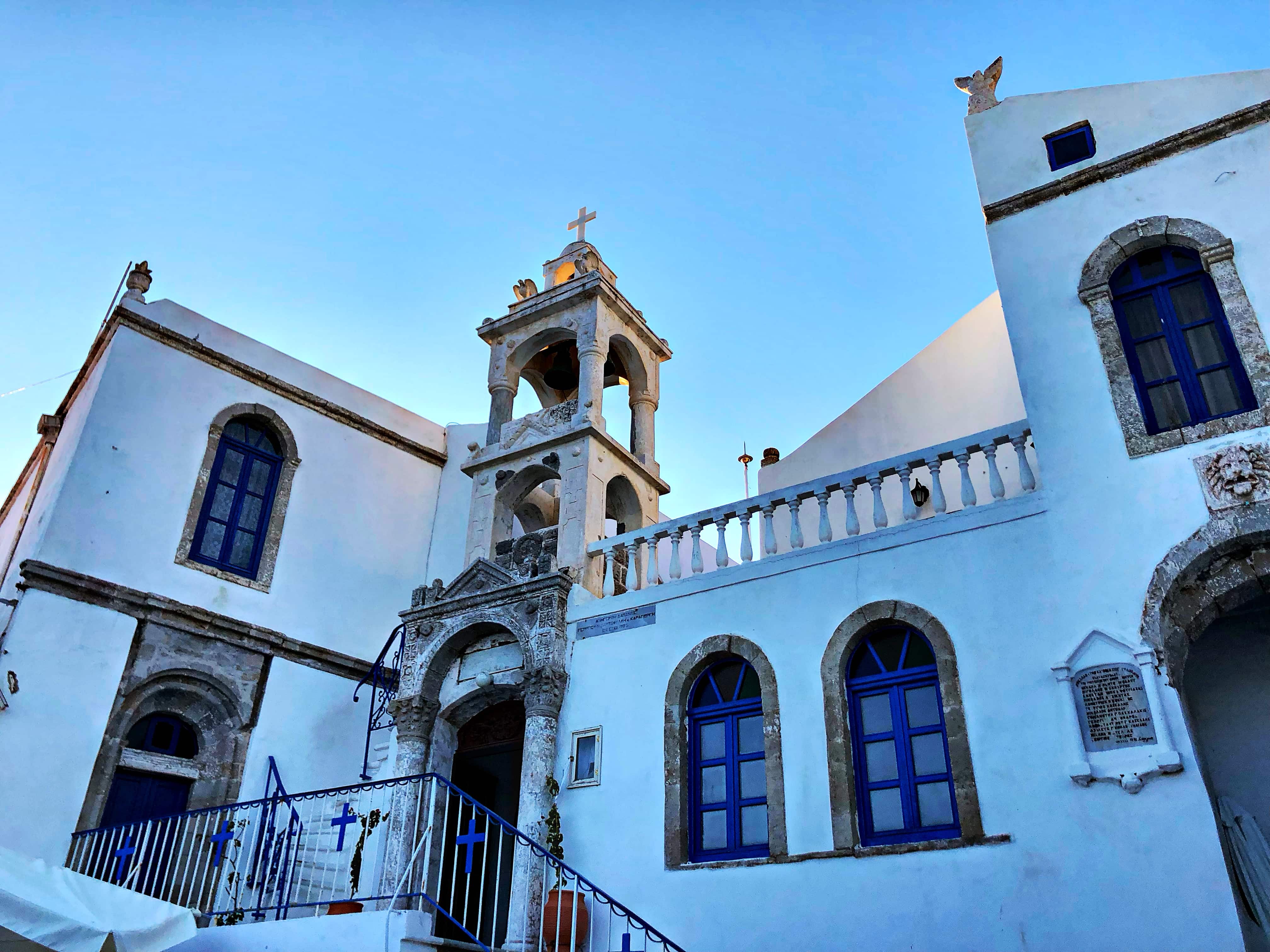 This island is perfect for a day out to enjoy unspoiled nature and great views. Rent a scooter and take a ride to the most hospitable of volcano’s craters- Stefanos ‚being a fantastic open-air geological museum.

Kalymnos, just a few miles off of the Turkish coast and close to the well known holiday island for rock climbers. The Kalymnian landscape is rocky, with rock faces of unique quality for sport climbing, easy accessible within a few minutes walking time from most of the islands settlements and motorways, offering breathtaking views with the endless blue of the Aegean Sea.Today the island has almost 2500 well equipped sport climbing routes for all climbing levels. 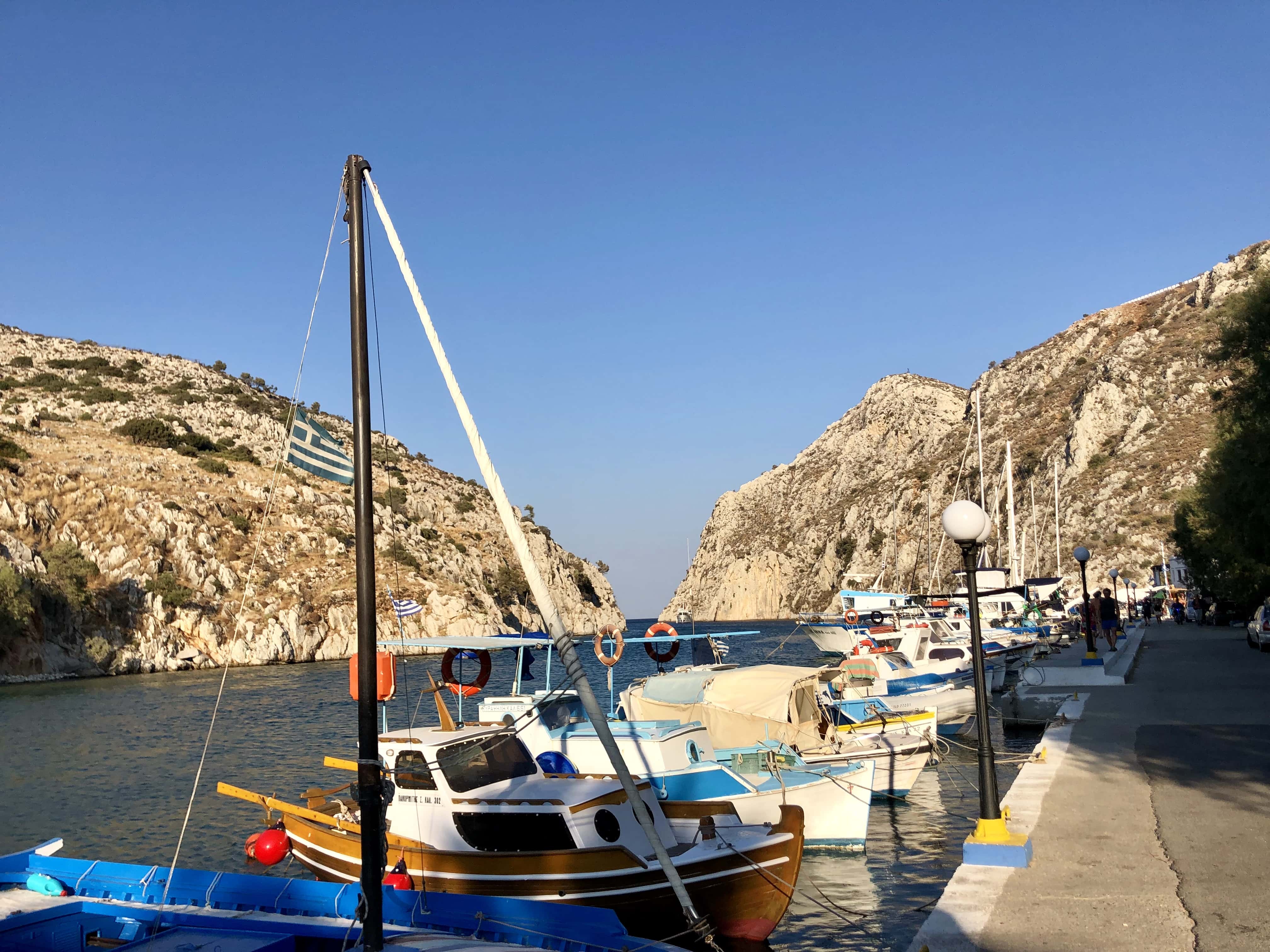 For those who prefer less thrilling experiences, hiking and shopping may be a way to enjoy this island.

Kalymnos is also known as the “Sponge-divers’ island”. Sponge diving has long been a common occupation on Kalymnos and sponges were the main source of income of Kalymnians, bringing wealth to the island and making it famous throughout the Mediterranean. 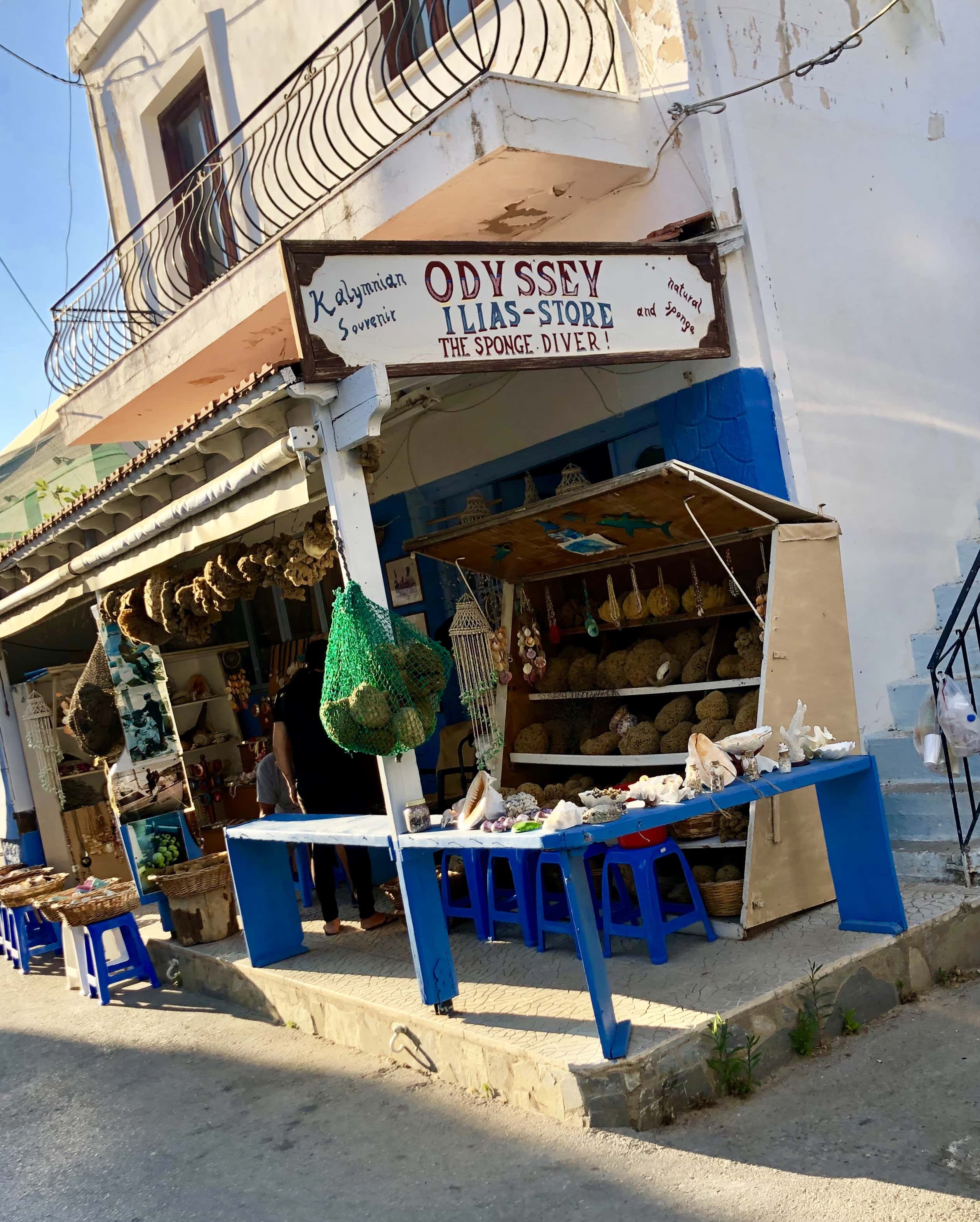 Patmos has been frequented by intellectuals, artists, royalty and celebrities from all over the world. Small and secluded yet spectacular all the same, it is the island of The Apocalypse, “The Jerusalem of the Aegean”, and has a deep relationship with religion. According to the tradition, Saint John the Divine was inspired to write the Book of the Apocalypse inside a cave in Nisyros. Today, the so-called “Cave of the Apocalypse” is one of the island’s main attractions. There’s also a large monastery dedicated to Saint John above Chora, the island’s capital.

Relax in Skala.Located in the central part of the island, Skala is the main harbor and commercial hub of Patmos. Home to some major sites such as the ruins of an ancient acropolis, the Monastery of Zoodochos Pigi, the church of Agia Paraskevi of Cavos, and the church of Panagia Koumana, Skala also boasts many lively and funky boutiques, restaurants, tavernas, bars, and cafés.

7.Leros-unspoilt Aegean charm of peace , pristine nature and intriguing past

Leros was an Italian naval base for 30 years. It was then home to a controversial mental asylum and later a penal colony. It is no wonder Leros has not been at the forefront of the holiday scene, but all that has changed.

Leros is both uncomplicated and intimate. With a small population of around 8,000 permanent residents, everyone knows everyone. Time here is not rushed, siesta is observed daily and the attitude friendly and relaxed.

A visit to the  11th-century Castle Of Leros at the peak of Apitiki Hill is a must. A legacy of the Knights of St John in the 11th century, you will encounter a dramatic 360º view of the island, a contrast of quaint villages and rugged coastline set to the backdrop of a medieval castle.

The northern side of Leros Island sets a perfect storybook scene. The medieval castle of Leros sits perched atop the hill with neighbouring windmills lining the ridge, like soldiers in a row, overlooking brightly coloured clusters of picturesque cobblestoned towns.

“The energy of the mind is the essence of life.” Aristotle

Create the year you want in 2022. Be successful and happy. Here is how. 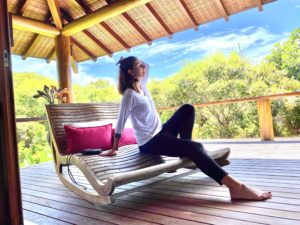 My top 5 Wellbeing Hacks to support your immune system naturally 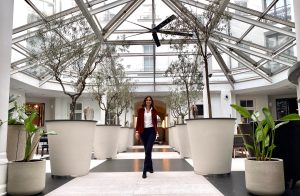 Embracing change in order to grow 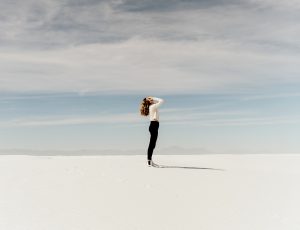 5 reasons why you attract the wrong love partners